With a party of up to 4 players, dive into the depths of the Citadel and challenge many foes that will work together to take your expedition down. With up to 3 weapons, 4 Abilities and also passive bonuses; your arsenal will be diverse. But the enemies will also bring their load of special talents and abilities to make for a difficult, but engaging experience. Many foes lie in your path, but none will be more challenging than the Citadel’s guardians. These enormous beasts will challenge you with unique mechanics and attacks. If you want to stand a chance of taking them down, you will need to prepare well for these encounters. LOVE LOOT? US TOO

We love weapons and we love variety. Weapons in each run will be different with different stats, Weapon Effects and Modifiers. Some weapons could have a life leach modifier, other will make your ability cooldowns reset faster. With weapon effect; add area of effect damage to your rifle or slow down your foes with the Pulsing effect. With loads more effects and modifiers and more to come, no weapon will feel the same. Most modern Roguelike are meant to be experienced alone. The few that allows for cooperation puts all players in the same role without real distinction between them. These make for some great games, but we believe there is also room for a more differentiating approach. We took elements from MMORPGs with their class system and the way they handle late game encounters by having Healer, Tanks and DPS and made a light version of this system. The player will be able to take any skills they want, but through passive abilities and the high difficulty of the game, we expect players to take on some roles on their own to tackle the difficult challenges that awaits them in the Citadel. 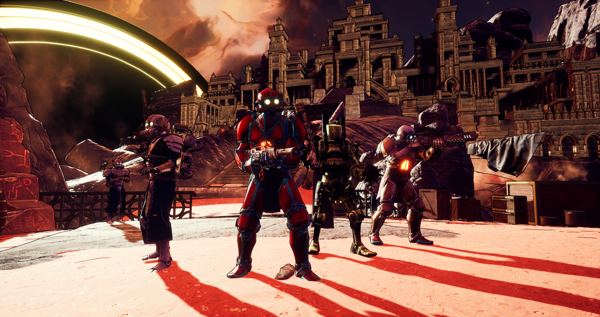 Prepare for your expedition by creating up to 5 loadouts. In each loadout, you can select 4 active abilities from a growing list of more than 30 abilities, a passive ability as well as the suit your character will be using. The suits, aside from looking good, also provide the player with different starting stats, such has having more health or more speed. You can also change the suit look by selecting 2 colors. Finally, select your weapon of choice and head on in to the depths of the Citadel.

Procedural generations is always tricky. We want to keep it interesting and fun to replay, but also want our environments to make sense and to feel like you are exploring a living Citadel. By going with a module-based system, we are able to create diverse and complex environments without compromising and making replaying the game dull. We also throw in multiple other randomly generated events, encounters and surprises to always keep it fresh.